Fluorescein (ex = 492 nm, em = 525 nm) is one of the most widely used fluorophors and is employed as a detection agent in numerous assays. The Dark Reader is at least twice as sensitive as a UV device for the detection of fluorescein and up to 16-fold when the dye is in a test-tube or in a gel apparatus.

In a recent study, Friedl and Graf (Electrophoresis, 22, 890-895, 2001) compared the detection of biotinylated proteins on nitrocellulose membranes using either:
(A) the fluorescence of fluorescein-labeled streptavidin visualized on a Dark Reader transilluminator, or:
(B) the luminescence generated by the breakdown of luminol (ECL) by peroxidase- streptavidin conjugate.

Method
A simplified summary of the basic protocols for the detection of biotinylated proteins by either (A) fluorescein fluorescence or (B) luminol luminescence is shown in the Figure. In both methods the local biotin concentration was first amplified by the use of the `catalysed reporter deposition` technique in which additional biotinylation is generated in the vicinity of the original biotin. Fluorescence was detected using a Dark Reader transilluminator together with a Hamamatsu CCD camera in Acquire Mode and an exposure time of about 10 sec. Luminescence was detected using Kodak X-ray film and an exposure time of up to 15 min.

Results
The results show that the Dark Reader-based fluorescence detection technique is much more sensitive than can be achieved using ECL luminescence. With a Dark Reader transilluminator it is possible to detect less than 10 pg of protein, compared with 100 pg plus using ECL. Graf and Friedl also point out several problems with the reproducibility and quantification of ECL signals as well as background problems. These effects can be seen in the wide scatter of ECL data points at lower protein amounts.

A simple and sensitive fluorescence technique for the rapid determination of protein phosphorylation states in gels! Pro-Q Diamond stain from Molecular Probes is an exciting new dye for the sensitive detection of phosphoproteins in 1-D and 2-D gels.The dye has numerous applications in kinase studies and phospho-proteomics. 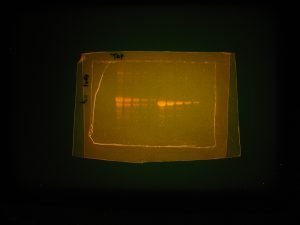 SYPRO Ruby stains are new, luminescent metal chelate protein stains from Molecular Probes. The dyes are maximally excited at 470 nm and the emission peak is about 610 nm – ideal spectroscopic properties for use with the Dark Reader. About 2 ng of SYPRO Ruby-stained protein can be detected directly by eye in an SDS gel using the Dark Reader and about 8 ng on a blot. 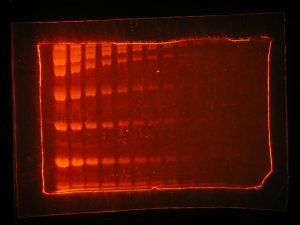 SYPRO Orange stain (Molecular Probes, Inc.) is a novel fluorescent dye for the detection of proteins separated by SDS or native polyacrylamide gel electrophoresis. An excellent report describing in detail the use of SYPRO Orange to stain protein gels can be found in Malone et al., Electrophoresis, 2001, 22, 919-932.) The detection limit for SYPRO Orange-stained proteins using a DR transilluminator is around 2 – 3 ng both by eye and using Polaroid 667 film. This level of sensitivity, especially by eye, is significantly greater than that obtained using a UV device (about 20 ng). 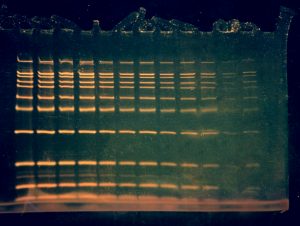 PBXL fluorophors (Martek Biosciences Corporation)are based around light-harvesting proteins isolated from cyanobacteria and red algae. They deliver up to 1400 chromophores per binding event without signal processing, signal amplification or enzyme substrates. Available as a variety of conjugates with either streptavidin, or IgG, PBXL dyes can be used in numerous blotting and immunoassay applications that previously required more tedious enzyme amplification methods.

AttoPhos and AttoPhos Plus are novel alkaline phosphatase substrates invented by JBL Scientific Inc. and distributed by Promega. They can be used in any assay where alkaline phosphatase is the amplification molecule such as Western blots and ELISAs. The excitation and emission maxima of AttoPhos are 440 nm and 560 nm respectively – ideal for use with the Dark Reader. In conjunction with the Dark Reader, AttoPhos can be used to detect less than 100 pg of target protein.

© All rights reserved Dark Reader is a registered trademark of Clare Chemical Research, Inc. Dark Reader® devices including transilluminators, hand lamps and electrophoresis units as well as associated accessories such as viewing glasses, screens and camera filters, were for use until 2018 under one or more of US patents 6198107, 6512236, 6914250 and EP 0965034.